Who is leading the Big Conversation

The Big Conversation is funded by Leadership Gloucestershire, which brings together leaders from Gloucestershire’s councils, emergency services, health services and business community.

They have commissioned the University of Gloucestershire to be the independent facilitator of the Big Conversation assisted by Dialogue by Design, an employee-owned research and engagement company which works with public services, charities and communities across the UK.

What decisions have been made so far?

The only decision taken so far is that we all need to start thinking now about the county’s long term future and how we will address the scale of the challenges we are facing.

The eight ambitions and six ideas are only suggestions at this stage. They have been developed to stimulate a conversation about the sort of county Gloucestershire could be, the trade-offs that the county may have to make and the value that local residents, businesses and organisations place on different aspects of life in the county.

The consultation ran from 1 February 2018 to 31 July 2018 and we received approximately 2,500 responses which we are currently analysing.

A full report on the exercise plus next steps in the creation of a vision for Gloucestershire in 2050 is currently expected to be published towards the end of October.

Is the 'Super City' concept just about building a large housing estate?

The idea for a Super City connecting Cheltenham and Gloucester includes a lot more than new housing: it is about building a new centre that complements the existing centres of Cheltenham and Gloucester. It is hoped, for example, that it would create opportunities to build a state of the art hospital; a new sports stadium and entertainment venue; world-class higher education facilities; faster, cheaper and greener public transport connections; and a range of new cultural and leisure facilities.

Realising these ambitions would require some development within the green belt but some suggest this could be compensated by the development of green corridors through the city into the surrounding countryside. The idea is to create a new type of urban centre that enhances Cheltenham and Gloucester and links to and nurtures the surrounding countryside and Regional Parks (one of the other ideas shared as part of the Big Conversation).

If we don’t create a shared vision for the area now, there is a risk that the pressure for future development would be delivered in a piecemeal fashion and lead to uncoordinated urban sprawl. We would miss the opportunity to create a third centre with a distinct identity that would complement the historic cathedral city and spa town. 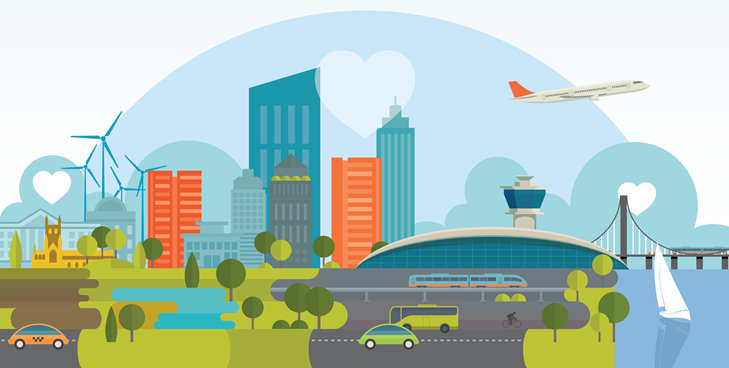