Sharpness and Lydney were once connected by a rail bridge that was lost through a series of barge accidents during the early 1960s. It was deemed not economic to repair by British Rail. Plans to re-establish a crossing between Lydney and Sharpness have become relevant with the economic decline of the Forest of Dean and large-scale regeneration projects at Berkeley. A new crossing would provide a vital connection between districts, and access to the Forest; thereby addressing employment and economic regeneration, education and skills development, housing need, and retention of young people.

The new crossing would provide a catalyst to grow the town of Lydney and to develop Sharpness from a small village to a town. It would improve their links to existing transport routes through the county, and create a re-energised economic centre. Investment in Lydney and Sharpness would seek to create a single ‘destination’ spanning the river with distinctive areas both sides, reflecting their individual cultures, landscapes, and heritage; and inject new life through economic opportunities.

As well as maximising the tourism potential of the area as an access point to the Forest of Dean and Severn Vale, it would also focus on enhancing employment opportunities and facilities for local people to both retain and attract young professional families. This would include housing, education, leisure, and health infrastructure, which would support those moving into the area to work at the new sites locally, as well as those commuting to the Super City, Cyber Park, and further afield.

There would be a focus on business development on both sides of the estuary, with facilities for industrial units and incubation spaces to enable and encourage business start-up and expansion. This may be linked to the further development of the Berkeley site and its focus on renewable energy sources.

The new crossing would be designed to be multi-purpose, to provide for multiple transport methods, and potentially provide a leisure facility with walking and cycling trails into the Severn Vale and Forest of Dean Regional Parks. Connection to the M5 would also be logical, transforming the quality of road access to the Forest of Dean. 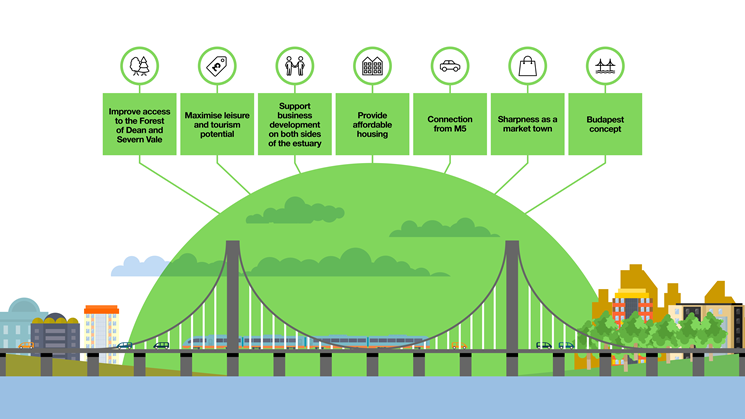